As always, the appendices (up to K!) are great.

Appendices A, B, and G are copied from App Note 49.

The first half of Appendix C, "Achieving meaningful efficiency measurements", is also borrowed from App Note 49, but the second half (starting with the calibration source in Figure C3) shows that considerable effort has gone into making the measurements more meaningful. Jim always devotes great effort to instrumentation, and it shows here. Again, precision RMS-to-DC conversion plays a large role. (Although Figure C6 is captioned "Typical efficiency measurement instrumentation", there's nothing typical about it.) The appendix concludes with a discussion of using calorimetric measures as a efficiency double-check (Figures C7, C8, and C9). As the man says, "Calorimetric measurements are not recommended for readers who are short on time or sanity."

Appendix D discusses more instrumentation, now focusing on photometric measurement. How much light is the CCFL producing? This question raises a key issue, as he explains in the footnote, "It is possible to build highly electrically efficient circuits that emit less light than "less efficient" designs." (See Figure J3.)

Appendix I is a brief (too brief!) discussion of the history and operation of the Royer topology.

Appendix J is my favorite. Titled "A lot of cut-off ears and no Van Goghs", it discusses some not-so-great ideas. On the whole, we engineers don't spend enough time talking about engineering failures, and there is often a lot to learn. Jim relates, "Backlight circuits are one of the deadliest places for theoretically interesting circuits the author has ever encountered." Figures J1, J2, and J3 attempt to increase efficiency by removing the losses in the LT1172. Unfortunately, the resulting lamp drive waveforms are undesirable. Figures J5 through J8 show suboptimal sensing schemes for measuring the output current. It is very instructive to consider why these circuits didn't work: I wish Jim had written more appendices like this one!

The app note concludes with a cartoon of his son Michael sitting in front of a 556. 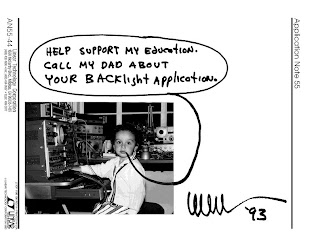 Posted by Doctor Analog at 9:59 AM