Another detour for the rest of this week: App Note 61 was published in August 1994. The next app note (App Note 65) was written over a year later in November 1995. In the intervening 15 months, Jim published a second book, "The Art and Science of Analog Circuit Design". So for the rest of this week, I will blog about the book. As I recommended for the first book, if you don't own a copy, you owe it to yourself to buy one. 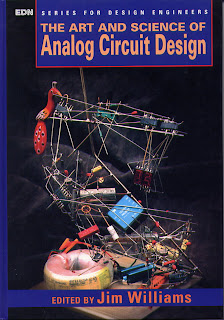 This book contains twenty chapters, again written by a wide variety of authors, including Barrie Gilbert (again), Greg Kovacs, Carl Battjes, Carl Nelson, and many others. Jim wrote three of the chapters himself. I'll discuss them each in turn. One interesting note at the beginning of the book is in the biographies of the contributors (starting on page xi). In Jim's bio, it says "He lives in Palo Alto, California, with... 28 Tektronix oscilloscopes", twice as many as he claimed last time!

Email ThisBlogThis!Share to TwitterShare to FacebookShare to Pinterest
Labels: Book