Instrumentation applications for a monolithic oscillator: A clock for all reasons. 20 pages.

This app note discusses applications of the LTC1799 oscillator chip. The approach here is classic Jim: Linear Technology produces a simple oscillator chip, and Jim's first thought is "temperature measurement!" The frequency of the LTC1799 is set with a single resistor, so Jim immediately replaces it with a platinum RTD (Figure 5) or a thermistor (Figures 7 and 9), in a variation of his normal voltage-to-frequency-converter theme. Figure 9 also includes galvanic isolation. Other unique sensors also appear. Figures 11, 13, and 15 use a fragile capacitive humidity sensor (which we've seen before), using the LTC1799 as either a reference oscillator or a clock source.

The two appendices discuss the LTC1799 in a little more detail. Appendix A discusses the internal topology and the master oscillator, and Appendix B discusses the care and feeding of the RSET pin (and potential bootstrapping).

The best quote is the pedantry in the first footnote,


Strictly speaking, an oscillator (from the Latin verb, "oscillo," to swing) produces sinusoids; a clock has rectangular or square wave output. The terms have come to be used interchangably and this publication bends to that convention.

The cartoon extols the simplicity of the LTC1799, "Everything should be as simple as possible, but not too simple." 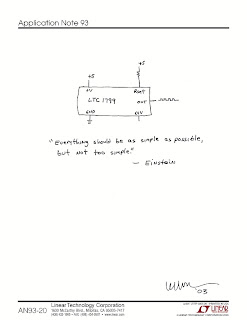