Slew rate verification for wideband amplifiers: The taming of the slew. 12 pages.

This app note discusses slew-rate measurement, which is another great application for Jim's high-speed pulse generators. The text is only 12 pages long, but it is not a "brief" project. Previously, he has used a variety of pulse generators for measuring oscilloscope bandwidth and amplifier settling times. For examples of the circuits used in some of these other applications, see
Here he is directly measuring slew rate, which requires even faster pulse rise times.

The app note begins with a quick history lesson in footnote 2,


The term "slew rate" has a clouded origin. Although used for many years in amplifier literature, there is no mention of it on the Philbrick K2-W (the first standard product op amp, introduced in January 1953) data sheet, dated 1964. Rather, the somewhat more dignified "maximum rate of output swing" is specified.

He quickly gets to the heart of the matter, the discussion of the necessary subnanosecond-rise-time pulse generator. The schematic in Figure 8 shows his 360-ps design, which is a great piece of work. This design is an improved version of Figure B1 in App Note 79.

Although the complete schematic is shown, a picture of the actual construction is missing. Much of the "secret sauce" of high-speed pulse generation is in the construction technique (as alluded to in footnote 11), so it is unfortunate that a photoessay isn't included. (I've seen one of these boxes, and it makes Figure B3 in App Note 72 look like child's play.)

Appendix A discusses measurement integrity, using a time-mark generator (Figure A1) and a 20-ps rise-time pulse generator (see the table in Figure A3). Yes, Figure A4 is produced by a pulse with a twenty-picosecond rise time! Appendix B discusses level-shifting (no active circuits here; your only hope is to use excellent transformers).

Appendix C discusses the horrors of connectors, cables, adapters, attenuators, and probes at these high speeds. The best quote is on page 11:


Skepticism, tempered by enlightenment, is a useful tool when constructing a signal path and no amount of hope is as effective as preparation and directed experimentation.

The cartoon shows off his 7104 scope, with a 7M13 alphanumeric readout plug-in (which produced his "signature" WILLIAMS03 in the corner). "I'm going as fast as I can." 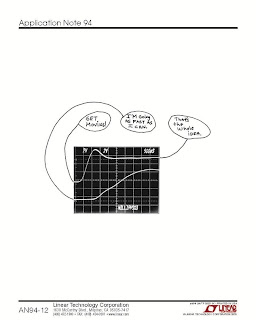 Posted by Doctor Analog at 3:13 PM