This short app note discusses the use of linear regulators to "clean up" the unavoidable ripple and spikes that exist in the outputs from switching regulators (see Figure 2). As Jim describes,

In practice, all linear regulators encounter some difficulty with ripple and spikes, particularly as frequency rises... Large numbers of capacitors and aspirin have been expended in attempts to eliminate these undesired signals and their resultant effects.

Much of the app note addresses the measurement of ripple-and-spike rejection of various linear regulators (of course), so Figure 5 shows a ripple-and-spike simulator. This circuit produces controllable input ripple and spikes to the regulator under test. Figures 7 through 13 show the results of such measurements.

Best quote (from footnote 2, discussing the reduction in spike amplitude achieved with an appropriately placed ferrite bead): "Dramatic" is perhaps a theatrical descriptive, but certain types find drama in these things.

The app note ends with a cartoon that praises ferrite beads. "Megahurts to minihurts converter." 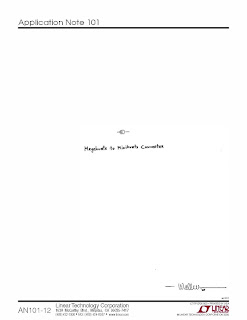 Posted by Doctor Analog at 2:11 PM