This app note discusses testing linear regulators under varying loads. Most of the circuitry in this app note is geared toward producing fast and large current pulses, like those shown in Figure 4. The main idea is shown in Figure 2; by turning the transistor Q1 on and off, the "regulator under test" can be put through its paces.

The next circuits allow for a continuously varying load level (instead of the discrete levels produced by the circuit in Figure 2). Figure 6 is implemented with a MOSFET device, while Figure 8 uses a BJT. The main trade-off is in the number of circuit trims; due to the large gate capacitance of the IRLZ24, the loop dynamics are (apparently) harder to tame.

The rest of the app note shows a number of measurements made with this test circuit. Figure 15 is particularly pretty, showing a swept-sine input from DC to 5MHz, which clearly shows the frequency range of the LT1963A's load rejection. Figure 16 starts a discussion on the effects of parasitics in the output capacitor. Sage advice appears in footnote 4, "Always specify components according to observed performance, never to salesman’s claims." This point is re-enforced by the presence of the 100-mV spike in Figure 30, due to a "poor grade 10uF" capacitor.

Appendices A (capacitor parasitics) and B (load regulation from the LT1963A datasheet) were guest-written by Tony Bonte and Dennis O'Neill, respectively.

Appendix C discusses proper probing and cabling techniques for these measurement. Due to the wide-band nature of the transients, attention to detail is required.

The termination at the oscilloscope end is not negotiable.

Appendix D shows an improvement to Figure 8, which doesn't require as many manual trims.

The app note ends with a cartoon. "Methinks the load doth protest too much (with apologies to Wm. Shakespeare)." 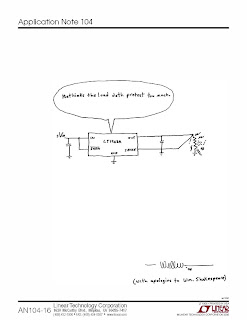 Posted by Doctor Analog at 2:24 PM