Success at the Swapfest! After my complaining last month, I found pretty good pickings at September's MIT Flea Market.

My first acquisition was a Frankenstein oscilloscope. The body of the scope says 465B, but the handle says 475. Some of the knobs are mysteriously covered with rubber caps. I really have no idea what I will find inside when I open it up... perhaps the guts from a completely different scope? Maybe a stripped chassis? Maybe a bobcat?. In truth, it doesn't really matter: it cost me $2. 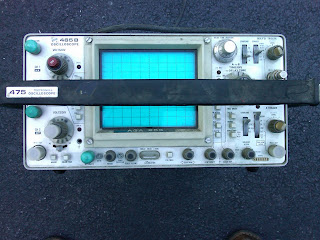 My second purchase was a Tektronix 575 Transistor-Curve Tracer. I spent a fair bit more than $2 on it (although less than a tenth of a current Craigslist asking price). It's missing a few switch caps, but all the tubes are inside. For those of you keeping track, yes, I already have one. However, I couldn't resist buying this one because it had a Hybrid Systems property sticker on the top and a Sprauge property sticker on the back (and a good friend of mine used to work for Hybrid Systems until they were acquired by Sprauge). Thus, I felt that I had to buy it for the provenance alone. A much better outing than last month's! (And, yes, I do feel bad for only paying $2 for the Tek 465B. The seller wanted $5, but he didn't have any change, and I didn't have any other small bills. If I see him again, I'll probably give him the other $3!)
Posted by Doctor Analog at 7:49 AM