When I started these "Scope Sunday" posts two months ago, I thought that I'd have plenty of new material from the upcoming MIT Flea Markets. The recipe was simple: I'd by a scope, or a plugin, or some test equipment, and post about it. I also had planned a trip out to California which included the De Anza Flea Market in Cupertino, so I was sure that I'd be buying too much gear this summer and blogging about it.

The reality of this summer's shopping has been less satisfying. I was at the MIT Flea Market last week, and after a quick walk around, the only piece of Tektronix gear that I saw was a 520A Vectorscope for $30 (guaranteed not to work). No, thank you. 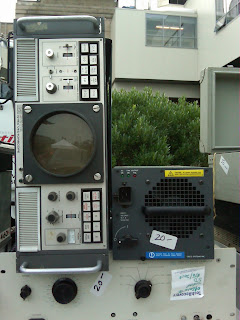 When I was at the De Anza Flea Market two weeks ago, I also found nothing. Nothing! It was very disappointing! Maybe it's just the August doldrums (happens every year), but I really was expecting to find more oscilloscopes and test equipment to choose from.

After a deeper search of the MIT Flea Market last week, I did find some additional gear at some unreasonable prices: a 465B for $275 and a broken function generator for $150. You know, these "Scope Sundays" posts are going to become impossible if I don't get some better luck. Maybe I'll go back to trolling Craigslist (or should it be described as "trawling"?). Maybe it's just a sign that I need to fix some of the gear that I already own, rather than acquiring more gear. (Nah, can't be.)

I did, however, purchase an HP 3400A true RMS voltmeter at the MIT Flea, but I'm going to save that until after App Note 61.

Looking forward to September!
Posted by Doctor Analog at 7:19 AM