Last weekend, I finally got a chance to visit the vintageTEK Museum in Portland, Oregon.  I had a great time.  The museum is smaller than I expected; in fact, there are only a few dozen instruments on display.  Here is a picture of the whole museum taken from the front desk. 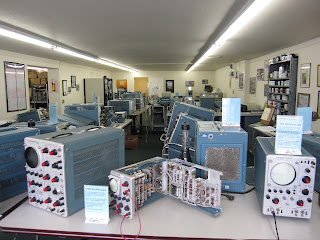 Despite being small, the museum has an impressive collection of rare instruments, including quite a few that I had never seen before in person.  First up, of course, is Tektronix's original oscilloscope from 1946, the 10-MHz-bandwidth 511. Only about 350 of these scopes were made (I have a 511A, which isn't nearly as rare). 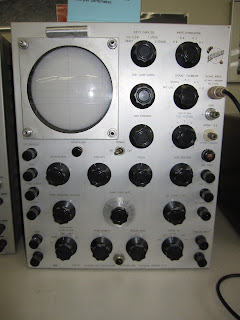 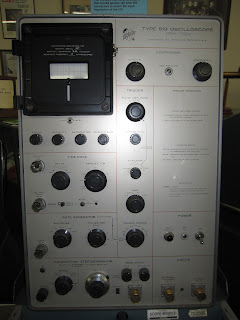 Next up is the 945, which is the military ruggedized version of 545.  Heavy and heavy duty. 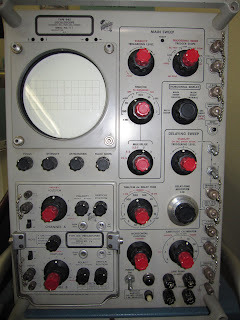 They also have a 7704A mainframe, complete with the P7001 digitizer. 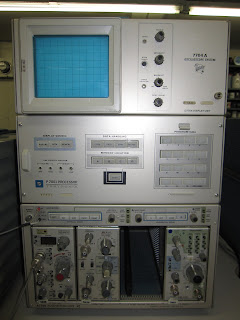 Of course, I thought the best part of the museum was the storage room and repair lab.  Here's the wall of letter-series plugins (check out the three different colors of type CA plugins in the bottom row; there's also two type O plugins and a type Q here, and a type N just out of frame).  I spent quite a bit of time poking around in the back room. 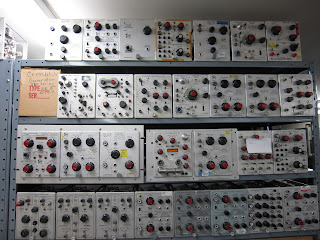 I actually spent most of the afternoon in the back, hanging around with two volunteers, who were busy sorting spare parts and fixing the horizontal sweep in a 547 (it was a busted tunnel diode, of course, part number 152-0125-00; luckily, there was a 547 parts donor on the shelf).  I don't know if I was a help or hinderance in the process, but I had fun. 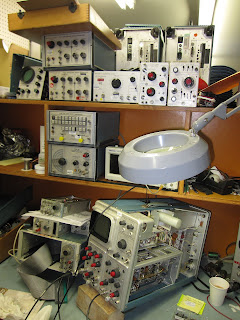 After the museum closed, Ed Sinclair invited me to join the TERAC (formerly known as the Tektronix Radio Amateurs Club) for their weekly Friday night dinner at Round Table Pizza in Beaverton.  There I met another great group of (mostly former Tektronix) engineers, including Deane Kidd, and had a great time.
Posted by Doctor Analog at 6:01 PM

I hope they can someday expand so they can put more scopes up on display. Stan Griffiths told me he has over 1500 tektronix instruments at his house, and I think he said over 700 of which are tektronix vintage oscilloscopes. And sadly, only 15 of them are at the museum.

I am quite pleased to find that I am not the only one who admires the brand of Tektronix...

In the photo of the workbench, I see that they have a Telequipment Serviscope Minor (top shelf, far left). That was my very first oscilloscope, back in the 1970s. It was a very low-cost instrument, popular with schools and colleges, but it didn't have any calibration. There's a photo of mine, here: http://www.gifford.co.uk/~coredump/scope.htm

I also recognise the Type 191 Constant Amplitude Signal Generator in that photo.

Have you heard the sad news about Hans Camenzind having died at age 78?

You should see us now at our new location. Check out the web site for vintagetek. So much to see.