In honor of Tektronix's 65th anniversary, which they celebrated this past week, here's another great old scope.  The Tektronix 511 was the first Tektronix product, introduced in 1947.  This scope is a 511A, which was introduced a few years later. 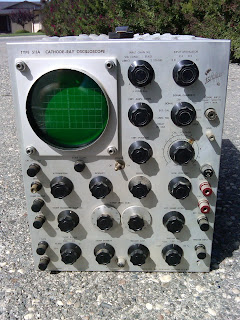 I actually bought this scope (serial number 2520) in California in January 2011 with the hope of showing it off to Jim (and perhaps working with him to restore it).  Unfortunately, he passed away before I even got a chance to tell him about it. 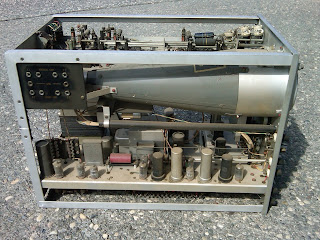 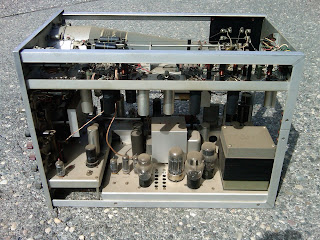 The purchase was almost a nightmare.  Almost.  I bought this scope from a guy on Craigslist.  He didn't know anything about it; he had found it (and quite a bit of old ham gear) in the basement of his new house when he moved in, and he was trying to sell it all for some free space and a few bucks.  (Apparently, the previous owner had passed away, and his kids just sold the house with everything in it.)

When I arrived to purchase it, he had it in the kitchen, set up and plugged in.  He said, "I've tested it and it shows a trace on the screen," and he flipped on the power switch.  My heart stopped!  Conventional wisdom is that these old scopes require a careful power-on ritual after being stored for a long time: the electrolytic capacitors go bad, the high-voltage section goes bad, and dirt and grime get into bad places.  Many aficionados recommend cleaning the scope, checking all the big capacitors (especially the "black beauties of death"), and bringing up the power slowly with a variac and an ammeter.  This guy just flipped the switch (as much as I wanted, I figured screaming "Oh, God, no!" would have been rude).  Thankfully, there was no smoke, and after the trace appeared, I quickly turned the scope off, and said "I'll take it."

I wonder how many old scopes have been damaged by over-enthusiastic sellers trying to demonstrate that "it works" to a buyer?

Oh, man, that breaks my heart.

Thanks for the anniversary wishes -- 65 years and going strong here at Tektronix! BTW, glad there were no sparks or smoke during the Craigslist pick up. Regards, Scope-Guru at Tektronix.

It's nearly Christmas, so I feel odd posting a comment on a blog entry from back in the summer. Nevertheless, I was thinking of your experience with the impatient Craigslist seller this weekend as I brought up an HP 200CD I bought on E-bay.

How would I apply power? My seller said it was from a "working environment." Still. . . .

The possibility of shorts over time or crud accumulation in bad places are good reasons to go slowly. But the usual reason given for the Variac approach is to "form" capacitors that may not have seen a voltage in years. As I thought about that, it seemed to make sense for instruments with solid-state rectifiers. But vacuum-state rectifiers require a hot filament before they become something more than a big open circuit. Worse yet, the filament voltage is stepped down from the mains, while most power supply caps see a voltage that's stepped up. Doesn't this mean that even with the Variac ritual, the voltage on the supply caps is going to go from zero to a pretty large value suddenly at some point, rather than ramping up smoothly over time from zero?

After that thought, I put on my headphones and snapped on the power switch. No tone. Damn! Busted! Then I had to laugh at myself as - after a few seconds - the tone appeared and drifted into stability. Vacuum-state! Things were slower in the '50s in more ways than one.