The applications section beings on page 21.

Again, as in App Note 13, he shows a wide variety of applications for this high-speed comparator. He starts with a crystal oscillator (Figure 47), also shown with switchable outputs (Figure 48), temperature compensation (varactor-biasing in Figure 49), and voltage control (more varactor-biasing in Figure 51). Figure 53 shows a voltage-control clock-skew generator with plus-and-minus 10-nanosecond skew. Voltage-to-frequency converters make an appearance in Figure 55 and 57. Figure 55 is a simple V-to-F, while Figure 57 is a precision topology, offering seven decades of frequency output (1 Hz to 10 MHz).

Several instrumentation applications are also included. Some of these circuits are related to the instrumentation circuits that he has used in recent (and will use in future) app notes. Trigger circuits with variable threshold (Figure 60) and adaptive threshold (Figure 63) are shown (we saw the adaptive-trigger circuit in Appendix C of App Note 70). A technique for increasing the comparator gain (using the venerable 733 amplifier, achieving 500-microvolt sensitivity) is shown in Figure 65.

A variable-controlled delay, up to 300 ns, is shown in Figure 69. Two circuits that use this delay are shown next: A high-speed sample-and-hold for repetitive signals (like Figure 29 in App Note 13) is shown in Figure 73. Figure 69's delay is also used in Figure 75 to add a programmable-delay trigger to his favorite pulse-generator topology (I think this circuit is the best circuit in the app note; I really need to build one for myself). Figure 77 shows these fast pulses using a 3.9-GHz sampling scope (a Tektronix 661 with a 4S2 plug-in).

Figure 78 shows a high-speed pulse stretcher that can trigger on pulses as small as 2-ns width input. The final circuit is a overload-protection circuit breaker, shown in Figure 83.

The app note ends with two appendices. The first one, "About level shifts", is from App Note 13. The second one, "Measuring probe-oscilloscope response", is a slightly modified reprint of Appendix D from App Note 47. This version includes Figure B2, taken with the 12GHz sampling oscilloscope that was alluded to in the footnote on page 93 of App Note 47 (seven years after writing that footnote, he finally gets to print the scope trace!). 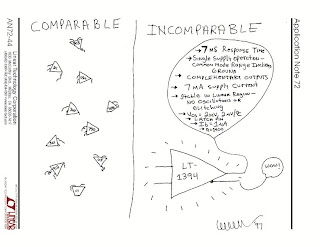