Again, we have a collection of circuits here that captured Jim's imagination in some way or are improvements of circuits from previous app notes.

Figure 19 is a single-cell-powered temperature-compensated crystal oscillator, similar to App Note 15, Figure 9. A boost converter is used to drive the varactor diode with bias voltages up to 4V.

Figure 21 appears to be an improved version of the "Zoo Circuit" V-to-F converter (App Note 23 Figure 16) with even lower power consumption (maximum 90 microamps). Figure 24 is another V-to-F converter, this one with a bipolar input (and a start-up circuit adapted from the Tek 547 trigger circuit).

Figure 27 is a 350-ps rise-time pulse generator. This circuit will be very useful in App Note 47 and other upcoming app notes (and it is much better than the 1-ns pulse generator in App Note 13 Figure D1). The pulse in Figure 28 is very clean, shown on his Tek 556 with the 1S1 sampling plugin. "I'm sorry, but 1GHz is the fastest scope in my house." (See Reference 7.)

Figure 30 is a low-dropout regulator using the LT1123 and the specially design (and now unavailable?) MJE1123 transistor. A germanium 2N4276 is explored as a replacement (but is no easier to obtain!).

Figure 36 is a power supply for a cold-cathode fluorescent lamp. Look at all the bottles! I count 48 of them. Yikes. Although Jim may not know it yet, this application is the beginning of a long-term obsession (or was it an assignment?). More praise for the Tektronix 556 and 547 on the bottom of page AN45-22.

Best quote (from Figure 36, a harbinger of future difficulties): "Do not substitute components."

More than half of the references on page AN45-23 (References 9 to 17) have to do with fetal heart monitoring (as shown in Figure 1). I feel a little sorry for Jim's wife and unborn son at this point. The App Note concludes with a great picture of Michael, perched atop a Tektronix 556. 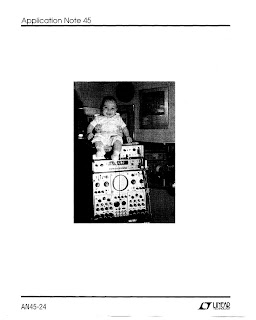