While technically the long-awaited update to App Note 10, to be honest, this app note is an abridged and modified version of App Note 74. Here the application is the measurement of amplifier settling time instead of DAC settling time, but the techniques (and the text) are significantly similar. The measurement problem tackled here is actually easier; amplifier settling is determined at the 0.1% point, while 16-bit DAC settling requires measurement of the 0.0015% point. (The amount of laboratory work involved was no less, however; Appendix E is proof of that fact.)

The settling-time measurement circuit is shown in Figure 6 (compare to App Note 74 Figure 6). The modifications for this application include a change to the input drive (to drive a voltage step to the op amp, instead of a digital command to the DAC), removal of the output amplifier, and removal of the temperature-control loop on the diodes (both because 0.0015% accuracy is no longer needed). Also, the sample delay and window generator is now implemented with LT1720 comparators instead of 74HC123 TTL logic.

Also, instead of three alternative measurement methods for comparison (as in App Note 74), he provides just one: the classical sampling oscilloscope. The "essentially identical" results of these two measurement are shown in Figures 18 and 19. Perhaps he felt he has less to prove this time?

The best quote is the app note's conclusion: "Examination of the photographs shows nearly identical settling times and settling waveform signatures. The shape of the settling waveform is essentially identical in both photos. This kind of agreement provides a high degree of credibility to the measured results."

Appendix B is new, discussing one of his favorite topics, subnanosecond pulse generators. He complains about the prices of current production units ($10,000 to $30,000), discusses his favorite vintage units (HP-8082A, HP-215A, Tek 109, and Tek 111), and then shows his own design in Figure B1. This circuit, as he would likely say, "is the beneficiary of considerable attention over a protracted period of time." It is now loaded with features, including a fully adjustable pulse amplitude, an external input to determine repetition rate, and an output trigger pulse that is settable from before-to-after the main pulse. Figure B4 shows the high-speed pulse in all its glory, measured with a Tek 547 with 1S2 sampling plug-in.

Appendix E discusses breadboard construction (like App Note 74 Appendix G) and includes another photo essay on the construction of the settling-time measurement circuit (Figures E1 to E6), proving that the lab work was exhaustive.

The app note ends with a cartoon, of course. Thirty nanoseconds is hard! 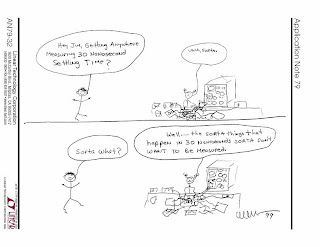