This app note is a sad postscript to Jim's love of RMS-to-DC converters. One of Jim's favorite chips was the LT1088, which he originally discussed in App Note 22, and then used in many, many app notes, including App Notes 47, 49, 55, 61, 65, 75, and 83. Jim has heaped high praise upon these thermal RMS techniques. Appendix A in App Note 61 is particularly noteworthy, where he includes pictures and schematics of the innards of an HP3400A RMS voltmeter, and then compares it to the elegant simplicity of an LT1088 circuit.

However, the LT1088 is now obsolete. And with the present app note, it seems that it has been replaced by the LT1966 family, discussed here. There is no mention of thermal RMS techniques here, despite all of his previous rants and raves. (For example, see Figure C5 in App Note 83: "Four thermally based types agree within 1%. Other instruments show relative error as large as 48%.") If these parts were better than the LT1088 (and not just "newer"), wouldn't there be a direct comparison?

It gets worse... The only mention of thermally based RMS measurements appears in Appendix B, where he discusses laboratory meters by HP and Fluke. The footnote on page 17 says, "See references 1 and 2 for details on thermally based RMS-to-DC conversion" which are applications notes from Hewlett-Packard and Analog Devices. Why wouldn't he reference any of his own (voluminous) writing on thermal RMS-to-DC converters? Was he told to pretend that the LT1088 never existed?

That all said, some of the applications circuits are quite interesting. Figure 8 is effectively a linear regulator that regulates an AC waveform (the MOSFET Q2 in the diode bridge is the series-pass element). Figures 9, 10, and 12 show high-fidelity preamplifiers. Figure 15 is an oscillator with frequency stabilization (using a quartz crystal) and amplitude stabilization (using an RMS measurement loop). Figure 17 is a RMS-leveled noise generator. Figure 20 is an AGC loop that uses the RMS measurement in the feedback path (see also Figure 139 in App Note 47).

The app note ends with a cartoon. "The Good, the Bad, and the Ugly." 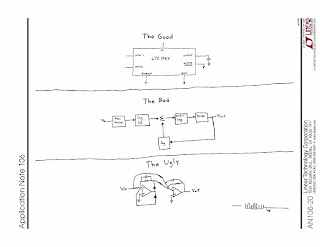 I suppose that the LT1088 would have taken the crown as "the beautiful one".
Posted by Doctor Analog at 4:23 PM