"Developments in battery stack voltage measurement: A simple solution to a not so simple problem." 24 pages.

In my last post, I retold my favorite Bob Widlar story, where he pulled a great misdirection prank in the literature right before the release of his landmark LM109 monolithic voltage regulator. I mentioned that story because an acquaintance of mine once suggested that App Note 112 was also a misdirection prank. He asserted that this battery-stack measurement scheme, using all of these transformers, switches, and diodes, is overcomplicated, and besides, Linear Technology later released the LTC6801 single-chip solution to battery-stack voltage measurement.

I don't believe that for a minute. Jim really did love transformers.

Jim once gave a talk to my M.I.T. class on "Transformers: Circuit Design's Hidden Ace," where he discussed the various and sundry measurement applications for transformers. He discussed this app note, as well as the Tektronix CT-1 and CT-2 current probes (see Figure 14 in App Note 106), low-voltage applications (see Figure 2 in App Note 113), and piezoelectric transformers (see App Note 81). He loved transformers. I bet that, even with the available single-chip solution with the LTC6801, Jim still thought that this transformer-based technique was best. No misdirection here.

(Also, this app note is reprinted in the third book as Chapter 19, which they wouldn't have done if it really was a prank.)

This app note discusses a transformer-based approach to measuring the individual cell voltages in a battery stack. The detailed schematic is shown in Figure 4, with the real accuracy shown in Figure 6. The transformer-caused droop on the DC measurement is only 0.2%. Figure 8a shows the multi-cell version, with both measurement channels and calibration channels (of course).

(Figure 8b and page 7 are where you can tell that this app note is coauthored.)

Appendix A is another great "A lot of cut off ears and no Van Goghs" appendix (like Appendix J in App Note 55). "The problem appears deceptively simple; technically and economically qualified solutions are notably elusive." Figure A2 is "quite expensive" indeed (the "low cost" AD202 isolation amplifiers are $30 each). Figure A3 is a switched capacitor scheme (which I suspect is the internal design of the previously mentioned LTC6801). Figure A4 uses many isolation barriers, of some kind.

Appendix B includes a "battery simulator" for testing. Appendix C ends the app note on a sour note (eight pages of microcontroller code).

The app note closes with a cartoon. "Piece of cake." 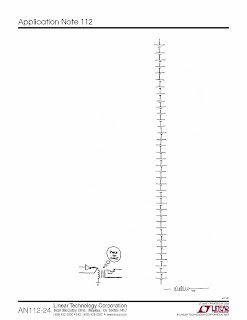 Posted by Doctor Analog at 6:26 AM