This morning, I am headed to the MIT Swapfest (the first one of the 2012 season!). I told my students to attend for extra credit (they have to find me and check in with me).

There were a few Tektronix oscilloscopes in attendance, but nothing that I didn't already have. Since it was the first Swapfest of the season, the prices were on the high side (next month, I'll have plenty of opportunities to buy stuff I don't need at NEAR-Fest, Dayton, and the May Swapfest). I did take a few pictures of some Tek gear. 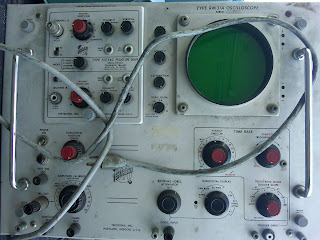 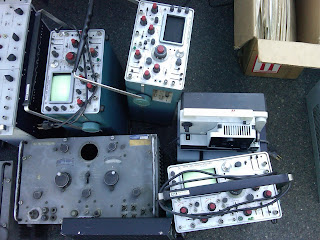 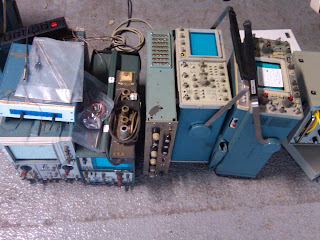 Other random oscilloscopes, for $60 each. Maybe there will be some better deals next month.


I did buy this book with an awesome cover. I couldn't resist! 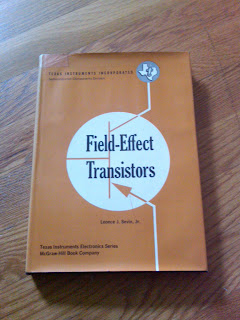 1. What's wrong with this dust jacket?

2. How mad do you think the author was when he saw what the art department did to the cover of his book?
Posted by Doctor Analog at 6:42 AM

Good luck for anyone who wants a patent on a NIGBT (non-insulated gate bipolar transistor). This book will be held against that person, proving his innovation has been published already.

How mad? Maybe mad enough that he applied a voltage in excess of V_DS,max (or V_CBO?) to the dust jacket?

To collect classic Teks here in Germany is also fun -
next weekend I will have a chance to see a collection of 20+ Teks in Berlin which may be brought to the scrap yard..
I think I have to safe at least some of them...
535, several 555, 556, ...
Regards
Hans

How many Tektronix scopes can you count on board an airplane that flies into hurricanes (link found here)?

Also, what other types of cool gear can you find? For insance, there seems to be a recorder using analog audio cassettes in one of the racks on board of the plane...

Always make friends with your artist.