Appendix E is an updated version of Appendix E from App Note 55. Open-lamp protection is built into the LT1182 family of parts, so the solution is much easier now than it was in App Note 55. See the connection to the BULB pin in Figure E1.

Appendix F is an updated version of Appendix F from App Note 55. Again, the LT1182 family provides significant advancements over the simple schemes shown in the previous app note. The precision PWM generator in Figure F6 allows for careful calibration (of course).

Appendix G is wholly new, discussing layout and component issues. Careful consideration is given to the current flow in various traces. The proper layout of the high-voltage section is also discussed and illustrated in the figures. Slits and routed voids in the board (Figures G5 and G6) prevent leakage. Additional good board construction is shown in Figures G7 through G10. Figures G11 and G12 are suboptimal, and Figures G13 and G14 are a disaster ("Board failed spectacularly at turn-on."). I think the best quote in the whole app note is in the caption of Figure G14, "Board needs complete re-layout. Computer layout software package needs E and M course."

The rest of Appendix G discusses the discrete capacitors, transistors, and magnetics. "Substitution of standard devices can degrade efficiency by 10% to 20% and in some cases cause catastrophic failures (Don't say we didn't warn you)." A excerpt from Zetex App Note 14 discusses transistor operating conditions and requirements.

Appendix H is copied from Appendix G of App Note 55.

Appendix I, "Additional Circuits" is an updated version of Appendix H from App Note 55. Figure I1 is a high-power CCFL supply, and Figure I2 utilizes two (physically smaller) transformers for space savings. Figure I3 is the laser power supply that we've seen before (Figure H2 in App Note 55).

Appendix J is mostly new, with some figures and text borrowed from the main body of App Note 55 (Figures J2 and J3 originally appeared as Figure 13 and 15 in App Note 55). Figures J4 through J7 outline the use of the built-in LCD contrast control in the LT1184 family.

Appendix K is copied from Appendix I of App Note 55.

Appendix L is copied from Appendix J of App Note 55, with two changes that I was able to find: (1) the last line on page 121 questions the effect waveform crest factor on lamp lifetime, and (2) Figure L9 and the accompanying text is new.

Of course, the app note concludes with a cartoon. The second best quote in this app note is the last line of the cartoon: "Edison got it right the first time." 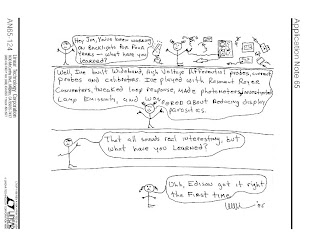