Appendices C and D discuss circuit-probing and breadboard-construction techniques. We've seen a lot of this advice before (in App Note 47), but here the emphasis is on low-level sensitivity, rather than high-frequency fidelity. In short, it's all about the experimental measurements. I love the quote,

The stars of Appendix C are the isolated trigger probe (Figure C15) and the adaptive amplifier (Figure C18). Jim sure did love his probes! Back in Chapter 17 of his second book, he said, "It's too embarrassing to print how many probes I own", and here he is inventing and building new ones.

Appendix E briefly discusses selection criteria for linear regulators. Really, I think that it was included as an excuse to show off his HP200A oscillator in Figure E2. 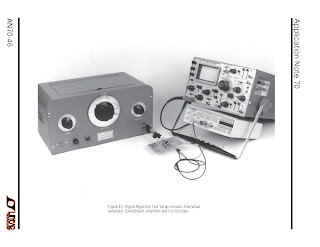 This photograph is perhaps a hint as to what he did in the two years since the publication of App Note 65. In Figure E1, the oscillator is label "High voltage, floating output sine wave generator, HP200A typical". Typical. Ha!

Appendix F discusses transformers and inductors. Appendix G was guest-written by Carl Nelson, discussing the advantages of slew control. Appendix H discusses hints for low-noise performance, including slew-rate adjustment, component selection, and another admonition to read Appendices B and C. The warning in the footnote on page 50 is my favorite: "I do not wax pedantic here. My guilt in this offense runs deep."

Appendices I and J are two more guest-written contributions. Appendix I (from Jon Roman of Coiltronics) discusses radiated noise from transformers and inductors. Appendix J (from Bruce Carsten) discusses a clever EMI sniffer probe. (Another probe!)

Appendix K shows the results of using an LT1533 low-noise power supply with a 16-bit analog-to-digital converter. Perhaps a preview of things to come? Is Jim thinking about A/D conversion?

The app note concludes with a (hastily drawn?) cartoon. "I can't believe it's not a battery." 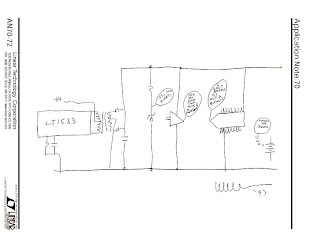 Posted by Doctor Analog at 4:05 PM