As I've mentioned before (for example, here and here), I have been looking to acquire a Tektronix 556 for some time. The Tek 556 was one of Jim's favorite scopes. Its damaged graticle was a trademark touch in many of his application notes, for both National and Linear. He used it in many of his otherwise-impossible measurements (such as simultaneous time and frequency domains and multiple asynchronous waveforms), he used it as a prop for pictures of his son (here and here), and he used it for comic relief.

Last week, one appeared on Craigslist in New Hampshire. 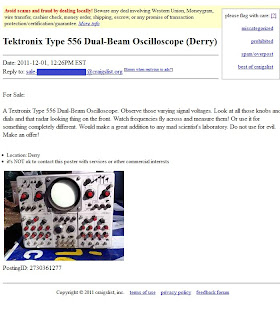 It even has two 1A4 four-channel plug-ins! Sweet. I crafted a slightly boastful email to the seller, promising to take great care of it and warning against the parasites who would strip it for tubes. (I also pointed to this blog as proof of my good intentions.) Unfortunately, I had to "bid" against some guy in Texas who was willing to pay for shipping, but after a brief negotiation, I prevailed. I drove up to New Hampshire and picked it up this morning. 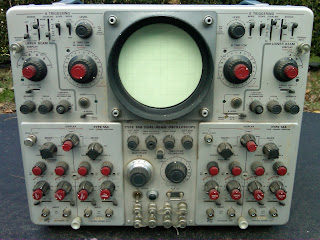 My wife made me open it up and check it for mice before I was allowed to bring it into the house. 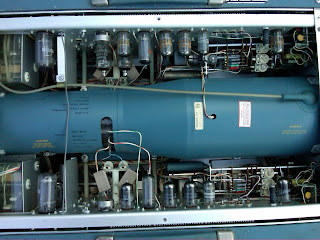 No mice. It's beautiful, inside and out.
Posted by Doctor Analog at 2:40 PM

Congrats! You gotta love the note that says "Do not use for evil."

The one I have has a label on it that tells me it was used by IBM. Sadly, it recently became faulty. It blows the fuse of the mains outlet. Depending on which outlet I use, the fuse trips instantly or after approx. 3 seconds, which makes me hope it's not more than maybe a bad rectifer or capacitor on the mains transformer's secondary.

And he's got one after the major mod. After the mod, the lower beam could display either the A or the B sweep, the germanium DTG2400s in the power supply were replaced with silicon, as were many in the vertical amplifier, plus other shouldadoneits.

The major mod was done around 1969, after some discussions with engineers from Boeing who were setting up instrumentation trailers at the Nevada test site. Previously, only the B sweep could go to the lower beam.

The graticule cover looks strange, almost as if it came off a 520 Vectorscope.

Kent,
I was looking for your email address to tell you about the vintageTek Museum in Portland Oregon. www.vintagetek.org We are commemorating the 1945-1985 era of Tektronix, Inc and have access to over 2,000 instruments, manuals, parts, and memorabilia. We opened to the public in September 2011.