My friend Will sent me an email last week with the subject line "Sorry." Inside, he said, "I know you are out of space but..." and he linked to a Craigslist posting with the headline "Tektronic Scopes $50" [sic] and the following picture. 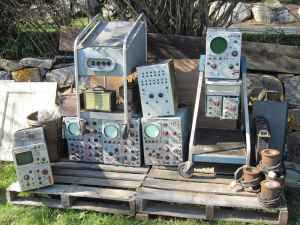 How could I resist? These orphans needed rescue!

Saturday morning, I drove an hour to meet the retired gentlemen who was selling them. Long story short, he was cleaning out his barn, where he had stored them for many years after his employer discarded them. In the lot was a 585 (the fastest 500-series mainframe), a 547 (which I'm happy to have as a spare), and a 180 OCXO time-mark generator. There was also a 504 (to complement my 503), a 535A (seems like there's a 535 in every lot), a 561B (not a great scope, but I wasn't going to say "no"), a few spare plug-ins, and a box of original manuals. 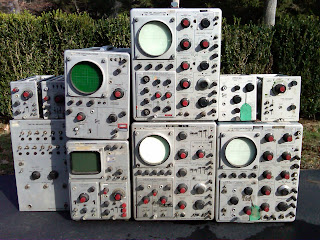 The scopes were dirty, but in pretty good shape considering they had been stored in a barn. I don't think I brought home any mice this time, but there were definitely some spiders. Unfortunately, the box of manuals had extensive water damage, but nonetheless, it was a good day.

My list of projects for 2012 is getting too long. I should stop now.


UPDATE: I spent some time carefully inspecting the scopes Sunday evening. All of the scopes had all of their tubes, which was more than I had hoped for. Clearly, they were stored in a DAMP barn, as there was a fair bit of rust and corrosion. I didn't find any mice, and only found one spider infestation.

The 535A is in the worst shape, with rust on the laminations of the power transformer and on the back of the front-panel controls. There is also some strange corrosion around the neck of the CRT. I really didn't need another 535A anyway.

The 585 is in pretty good shape, except the top-right-back corner is smushed in a little bit (it was clearly dropped). The insides are clean and complete, without any obvious corrosion (but it did include the spiders). I hope that it can be restored to full operation, as I would really like to have a working 100-MHz 585.

The 547 has the worst-looking exterior but the best-looking interior. I don't know if it's worth trying to restore the chassis, but this one will make a good parts donor.

The 504 and 561B are in fair shape, no better or worse than the others. They are lowest on my "restoration and repair" list. I'll probably fix up the 504 (to go with my 503), but I'm not really a fan of the 560 series. However, the 561B is an all-solid-state design, so if I run out of other things to do, it might be fun to poke around in it... but I'm trying to avoid collecting another series of plug-ins.
Posted by Doctor Analog at 11:30 AM

Enjoy the 585's distributed amplifier! It's the reason I wouldn't be able to resist getting a 585, too, if I found one somewhere for cheap.

Yes, I agree. I probably could have resisted buying this lot of scopes, had it not been for the 585.