The first two application sections (pages AN47-32 to AN47-51) cover amplifiers and oscillators, well-worn and familiar territory.

Five DC-stabilization schemes for wideband amplifiers are shown in Figures 71, 72, 73, 74, and 76. Some of these circuits follow up where App Note 21 left off. I think Figures 72 and 73 (the feedback approaches) are best, of course. Figures 74 and 76 require too much tweaking and "select at test" for my taste (although the results that Jim achieves here are impressive).

The next two circuits (Figures 86 and 88) are differential comparators with offset. It seems like he was thinking about variations on the settling-time-measurement theme. See Appendix B for instrumentation and discussion of settling-time measurement (and there is an upcoming app note dedicated to the topic).

The next group of circuits are amplifiers for fast photodiodes. Starting from the simple (Figure 90) to the adaptively triggered (Figure 97). (The latter circuit is an improved version of Figure 38 in App Note 13, employing wideband op amps instead of the previously used discrete stages.)

Figure 99 is another high-speed current-to-voltage converter application. The AD834 is a 500MHz multiplier, with differential-current outputs. Here, the LT1193 converts the differential current into a single-ended voltage with a 50MHz bandwidth.

The next two circuits (Figure 101 and 104) are improved versions of the power gain stages from App Note 18. Figure 106, 108, and 109 show circuits using piezoceramic and crystal filters.

The next section revisits some oscillator topologies. Figure 111 is a quartz-stabilized oscillator with a lamp for amplitude control. Figure 112 uses a feedback loop with a FET as the variable-resistor control element. Figure 114 adds frequency control, using varactor tuning.

The best circuit is the Complete AM Radio Station in Figure 116. I'm a sucker for clever uses of op-amp offset pins. Be sure to fill out the forms in Appendix G. 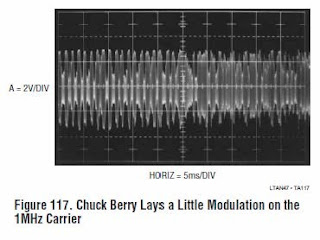 Posted by Doctor Analog at 8:37 AM