The first sections of App Note 47 are "Mr. Murphy's Gallery of High Speed Amplifier Problems" and the "Tutorial Section". Mr. Murphy's Gallery is a expanded and improved version of "The Rogue's Gallery of High Speed Comparator Problems" from App Note 13. The best part of this gallery is the rating system: the average number of phone calls they received per month due to each problem. The winner, of course, with 165 calls per month, is "Excessive Capacitive Load". 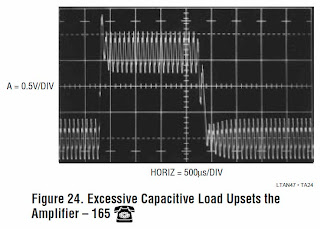 The "Tutorial Section" begins with a discussion of termination quality and high-speed pulses (using his new 350ps-rise-time pulse generator from App Note 45: compare Figure 29 with App Note 45 Figure 28). A discussion of probe and probing technique follows, with Figure 31 demonstrating the (quite good) advice that "Sometimes the best probe is no probe" (demonstrated with his trusty Tektronix 556). Much of this section is borrowed from Appendix B of App Note 13.

The section "About Oscilloscopes" includes two pieces: a piece on bandwidth, and a piece on overload performance. The first piece begins with an interesting statement and footnote: "The protracted and intense development effort put toward [oscilloscopes] is perhaps equaled only by the fanaticism devoted to timekeeping (in particular, the marine chronometer received ferocious and abundant amounts of attention)." (Note that Jim wrote this statement almost five years before the publication of Dava Sobel's popular "Longitude" book.) An interesting gallery of oscilloscope pulse responses are shown in Figures 38 through 44. The fastest scope shown (Figure 38) is the Tek 556 with the 1S1 1-GHz sampling plug-in. A Tek 485 is used in Figures 39 through 42, showing the 350-MHz (50-ohm) and 250-MHz (1-megaohm) bandwidths, with several different probes. A 150-MHz Tek 454A (fits under an airline seat!) is used in Figure 43, and, finally, a 50-MHz measurement is shown in Figure 44, using a Tek 556 with a 1A4 plug-in.

The piece on overload performance (Figures 45 through 50, with text beginning on page AN47-22) is borrowed from Box Section A of App Note 10. The next two sections "About Ground Planes" and "About Bypass Capacitors" (Figures 55 through 60) are also borrowed, from Appendix C and Appendix A of App Note 13 (respectively).

Finally, the "Breadboarding Techniques" and "Oscillation" sections include a pictorial tutorial on construction for high-speed circuits in Figures 62 through 65. "More than anything else, breadboarding is an iterative procedure, an odd amalgam of experience guiding an innocent, ignorant, explorative spirit." I often have a hard time convincing people that such a construction technique really works, but it really does! Nice, neat layouts, with lots of straight wiring, often have too much parasitic capacitance, parasitic inductance, and parasitic feedback loops. "Despite the breadboard’s seemingly haphazard construction, the circuit worked well."

Best quote (page AN47-5): "Like all engineering endeavors, high speed circuits can only work if negotiated compromises with nature are arranged. Ignorance of, or contempt for, physical law is a direct route to frustration. Mother Nature laughs at dilettantism and crushes arrogance without even knowing she did it."

It was 15 years ago that Jim checked my article about building some metrology tools (Electronics Now). As part of that kind contribution he sent me a huge photocopied text on the development of the chronometer. Thanks again for doing this blog!