This app note contains eight appendices (more than half of all the pages), and, as always, the appendices are great stuff.

Appendix A talks a little bit about the history of digital-to-analog conversion and includes a glamour shot of some items from his collection. The Kelvin-Varley divider is very nice. "What Lord Kelvin would have given for a credit card and LTC's phone number."

Appendix B is an updated discussion of oscilloscope-overdrive performance (see App Note 72 Figures 32 to 37 and App Note 47 Figures 45 to 50). Here he has added Figure B1, which compares the topology of various oscilloscopes, and he sings the praises of vintage analog instruments. "Unfortunately, classical sampling oscilloscopes are no longer manufactured, so if you have one, take care of it!" Indeed.

Several of the appendices follow-up on and expand on some issues from the main text. Appendix C discusses calibration of the amplifier delay in the settling-time measurement circuit. Appendix D discusses amplifier compensation (in his usual, seat-of-the-pants way), and the moral of the story seems to be "build it and see." Appendix F shows the circuitry necessary to interface DACs with serial-data interfaces to the settling-time measurement circuit.

Appendix E discusses the special case of using a chopper-stabilized amplifiers and the possible dangers involved therein. The scope trace in Figure E3 is especially frightening, although he admits,


This is admittedly worst case. It can only happen if the DAC slewing interval coincides with the amplifier's internal clock cycle, but it can happen. (Footnote: Readers are invited to speculate on the instrumentation requirements for obtaining Figure E3's photo.)


Such a tease! It'd be nice if he occasionally exposed the trickery behind some of these displays.

Appendix G discusses breadboard construction, and in particular talks about proper steering of the ground currents. Wise advice! As the footnote says, "I do not wax pendantic here. My abuse of this postulate runs deep." This appendix also includes a very nice photo essay on the construction of the settling-time measurement circuit (Figures G1 to G10). I'd love to see some high-resolution color versions of these pictures.

Finally, Appendix H shows some power-gain stages, some of them borrowed from App Note 18 and App Note 47 Appendix C.

The app note concludes with a picture of his work bench instead of a hand-drawn cartoon. 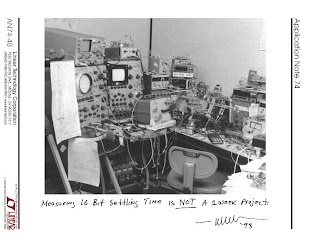 Posted by Doctor Analog at 9:00 AM

So what all is the benefit of using the actual 661 sampling oscilloscope vs simply using a sampling plugin on jim's tek 556 or his 547?

Would it be even better to use one of the 7000 series sampling 'scopes? (yes I know they have no vacuum tubes, but at least they're still analog!)

I've only recently started learning about the mystery of analog sampling scopes, and intend to learn as much as I can.