This short app note (seven pages of main text) is the sad conclusion to the grand saga of cold-cathode fluorescent lamps (CCFLs). Just as a reminder:
This conclusion is sad, because this app note contains a great idea (using piezoelectric transformers) that utterly failed to achieve traction in the marketplace. Jim gave a talk on this subject at M.I.T., and he seemed genuinely disappointed that this technology wasn't more widely accepted. (If I recall correctly, the issue was in assembly. Mounting the piezoelectric transformer on a circuit board requires specialized assembly equipment, and none of the usual-suspect laptop vendors wanted to invest in the technology.)

Piezoelectric transformers are not new to Jim. In fact, he discussed them in National Application Note 285, "An acoustic transformer powered super-high isolation amplifier", back in 1981. He also used one in Figure 51 of LTC App Note 29.

The enabling technology here is shown in Figure 7: the transformer terminal labeled "resonance feedback" allows for simplified drive circuitry, ensuring start-up and oscillation at resonance. The complete circuit is shown in Figure 9.

Appendices A and B were written by his coauthor at CTS Wireless Components. Appendix A is a short introduction to piezoelectric transformers, and Appendix B is a longer theoretical treatise.


Veterans of feedback loop compensation battles will exercise immediate caution when confronted with a pure and lengthy delay in a loop. Neophyte designers will gain a lesson they will not easily forget.

Again, I think he's mocking me in footnote 2. I must admit that "glop comp" is not a terminology that I am familiar with (although I do use "dominant-pole compensation" in everyday conversation).

The app note ends with a cartoon. "I can't believe I've been replaced by that skinny nothing." 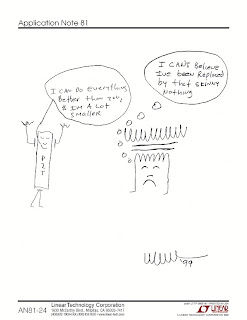 Posted by Doctor Analog at 1:37 PM

I was intensely frustrated last year when I tried to find a current source of piezo transformers, to exercise some of this app note. Very sad, I agree.