Last week, I spent a few hours at the Computer History Museum in Mountain View, California. I had previously toured the "Visual Storage" exhibit hall several years ago, but they have a new, beautiful display hall called "Revolution" that I hadn't seen yet. I spent the afternoon wandering around the exhibits and taking pictures. The Museum has a stunning collection of computer-related artifacts. Simply breathtaking.

However, (since it is "Scope Sunday") I have to report that they only have two pieces of Tektronix gear on display in their collection (other than the equipment currently on Jim Williams's desk). In the "PDP-1 Restoration" exhibit hall, there is an original PDP-1 that has been restored and is occasionally demonstrated to the public. In the back of the exhibit hall is a Tektronix 535A, which is probably the "historically accurate" instrumentation for working on a PDP-1! 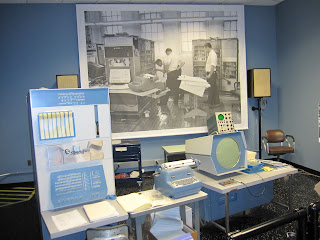 In the "Revolution" exhibit hall, in the "Minicomputers" section, there is a PDP-8/E that is part of some custom hospital equipment that mapped the brain's response to stimuli during surgery. This "brain surgery station" includes several pieces of Tektronix gear, including a RM561 oscilloscope (with 2A60 and 72 plug-ins), a 161 pulse generator, and a 162 waveform generator. 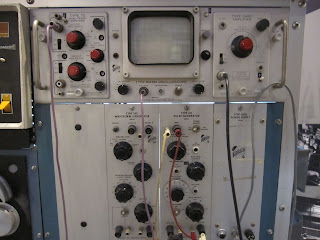 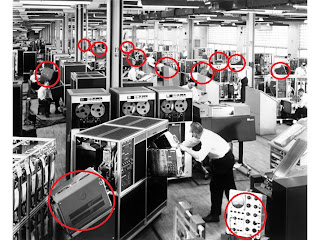 With that many pictures of oscilloscopes in the museum, shouldn't Tektronix scopes have an exhibit of their own?

(Sorry for the giant list of links. My cell-phone photographs of the photographs didn't turn out very well, so I thought that it was better to link directly to the source.)


Postscript: I am aware of the Vintage TEK Museum in Portland, Oregon (I haven't had a chance to visit yet, but it's on my 2012 list). However, I think that classic Tektronix oscilloscopes belong in all museums, including computer history museums, science museums, fine art museums, etc... Don't you?
Posted by Doctor Analog at 6:00 AM

Nice collection. Thanks! The beast at John Hopkins Lab (a.k.a. Model II) is especially nice and we could consider it to be an ancestor of this mobile platform from the orange company I happen to know quite well.

I think the one with the Illiac IV is a 453 or 454. The height and top and bottom panels give it away.