In response to my post last week about the lack of analog instrumentation the Computer History Museum, one person asked, "Haven't they ever heard of ANALOG computers?" The answer is "sort of"...

The museum does have a small number of analog computers in the main exhibit hall, including one of my personal favorites, an EAI PACE TR-48. 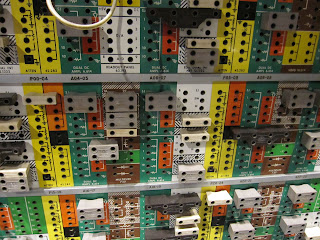 There is also a small display case that discusses the history of operational amplifiers, including a copy of Henry Paynter's "Palimpsest on the Electronic Analog Art", a Philbrick K2-W op amp, a Fairchild uA709 op amp, and a National LM10 op amp. 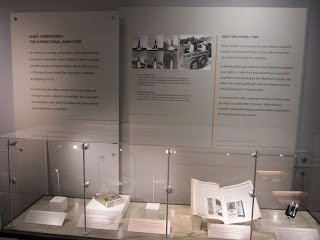 Over in the "Digital Logic" section of the museum, there are a few analog integrated circuits in the corner, along with a picture of Bob Widlar. 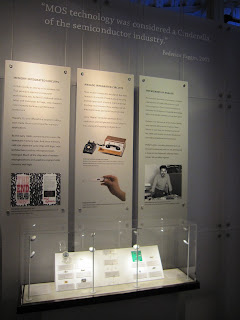 But really, that's about the extent of the analog content (being something of an analog bigot, I'd prefer to see much more).

One thing that I note with disappointment is an item that was formerly on display. When the museum had its "Visible Storage" exhibit hall, they had a beautiful analog computer by the GPS Instrument Company on display. This computer was a lovely, monstrous beast that showed the scale, and the artistry, of "big iron" analog machines. The museum does have a large picture of the machine hanging in the lobby (because, really, it is a work of art), but they no longer have the machine itself on display. 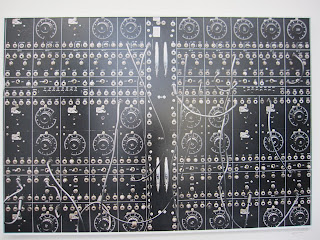 This machine is also close to my heart for two other reasons: 1. It was built in Massachusetts, not far from my house, and 2. Before the museum knew what they had, I found a reference that described the machine and the history of the GPS Instrument Company (the paper was Per A. Holst, "Sam Giser and the GPS Instrument Company: Pioneering compressed-time scale (high-speed) analog computing", in John McLeod, editor, Pioneers and Peers, San Diego: The Society for Computer Simulation International, 1988.) Finding this paper is why my name appears on this page of credits.


UPDATE: In response to this post, I received a very nice email from Alex Bochannek, who is a Curator at the Computer History Museum. He gave me permission to share his comments here.


In developing the exhibit, I made the conscious decision to focus on general purpose, indirect analogs, i.e., differential analyzers and electronic analog computers. The goal is to show a historical arc which begins with the work done under Vannevar Bush at MIT and ends with hybrid digital/analog systems and DDAs. The continuity in this changing technology story lies with the users’ needs for rapid, interactive calculation for (primarily) engineering problems.

The operational amplifier is displayed as an example of changing implementation technology and as a contrast to the integrator in the DA story. The latter also is a nod to mathematical instruments; slide rules and sectors you will find in the Calculators gallery. The op-amp text is slightly more technical in nature as indicated by the words Tech Talk on the panel. As you noted, you will find Bob Widlar repeated in the Digital Logic gallery.

Analog computing techniques in special purpose applications are represented by many of the devices in the Real-Time Computing gallery, for which I also was responsible. Direct analogs (e.g., network analyzers, electrolytic tanks, etc.) were excluded from the exhibit for lack of artifacts and available exhibit space.

I intentionally limited the content of the Analog Computing gallery to general purpose systems to highlight the broad applicability of analog computers. As you can imagine, most people in the computing field are not only unfamiliar with analog computers but tend to write them off as a pre-digital curiosity which surely must have disappeared many decades ago. By displaying unexpected and beautiful artifacts that represent a vibrant and innovative computing community, I hope to raise our visitors’ awareness of this important story in computing history.


Here is my response:

I truly enjoyed the exhibits. As I commented in "Scope Sunday 23" (the one about the oscilloscopes), I am impressed with the stunning collection of artifacts that the Museum has on display. Many computing professionals don't appreciate the importance of analog computers. I am reminded (and constantly humbled by) a quote from Ted Nelson:


There are two kinds of computers: analog and digital. Analog computers are so unimportant compared to digital computers that we can polish them off in a couple of paragraphs. (Nelson 1974)

Of course, Ted Nelson is a smart guy (coined the word "hypertext", inspired the creation of the Web) and many people seem to agree with him, but he doesn't (or didn't) know his history. I appreciate that the Museum is working to correct this view (and I hope Ted Nelson no longer feels this way!)

I also agree with your exclusion of direct analogs from the museum exhibits. Some people think that direct analogs are a "under-appreciated story" in the history of computing, but I do not. For example, William Aspray wrote a paper on Edwin Harder and the Westinghouse Anacom, which is little known compared to Bush's Analyzers. In his paper, Aspray laments


What accounts for the difference in recognition accorded these machines? One may be that Bush’s machines were built earlier that the Anacom… Perhaps more important was that Bush’s machines had a high profile at MIT, where they were used by many industries, as well as by many students who went on to important computing careers… It may also be an artifact of historical scholarship. Bush’s prominent role in organizing science for the Second World War and his plan for postwar government support of science has attracted scholars to examine other aspects of his career, including his calculating machinery. MIT as an institution had received considerable attention from historians of science and technology, whereas Westinghouse has been surprisingly neglected given its long history of contributions to electrical technology. (Aspray 1993)


I disagree with Aspray, here. The key issue is that the Differential Analyzers were true general-purpose computers, while things like the Anacom, network analyzers, and electrolytic tanks were really just scale models. While the work performed on these machines was of profound importance to the research teams using them, they were not analog computers. Furthermore, these "non-computing analogies" did not contribute significantly to the "culture of computing" that arose in the middle of the 20th century.

As you say, it is this culture of computing, grown on analog computers, that the Museum celebrates.
Posted by Doctor Analog at 6:00 AM