The Tektronix 7104 is the fastest analog oscilloscope ever produced. Originally designed in the 1970s for the US Atomic Energy Commission, it has a 1-GHz bandwidth and a special CRT that can display single-shot high-speed events in normal room light. I've been looking to buy a Tek 7104 for several years, but I haven't seen any for sale in New England (other than some ridiculous prices and/or shipping on eBay). Then, finally, last fall, something happened and my luck changed.
It started at the MIT SwapFest in September. I hadn't seen a 7104 at the MIT SwapFest in at least three years. Most months, you'll see a 7603 or a 7704 with the occasional 7904. But in September, I finally found a 7104, and I bought it for $175 from a mechanical engineer who didn't appreciate what he had. He knew it was a 1-GHz scope (much more than he needed), but he didn't appreciate it as the precious gem it truly is. The plug-ins were an odd assortment, including one 7a19, one 7a29p, and two 7b70.
Then, not four days later, I was at the surplus store up in New Hampshire, and in front of the store, sitting outside, they had a 7104 (with one plug-in, a 7a29 and no timebases) on sale for $100. Inside the store I picked up a 7b10 and a couple of 7b15 for $20 each.
Then, lightning struck a third time. I won an eBay auction for a (local) 7104 for $153 (but without any plug-ins). I drove an hour and picked it up that Friday. 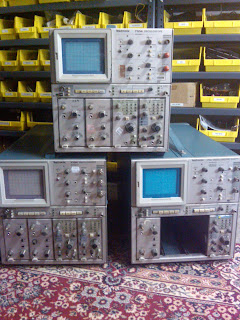 I hadn't seen a (reasonably priced) 7104 for sale in the northeast in years, and then I find three excellent deals in less than a month.
However, I was petrified to turn them on. I feared that the jugs would have a bad filament or excessive burn-in. I really didn't expect a $100 7104 to be in complete working order.  But I finally got up the nerve to test them. My good friend Eugene came over to my house one Sunday afternoon and brought his Tek 109 pulser. Buzz! We tested the 7a29 and 7a19 plug-ins in a 7904 and then turned our attention to the 7104s.
Throwing caution to the wind, we plugged in the scopes, and (after turning down all the intensity knobs and while holding our breaths) we powered them up. After a fair bit of fiddling, the traces appeared, and the working bandwidths of the systems were confirmed. 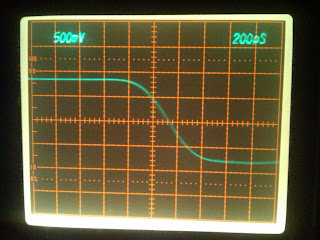 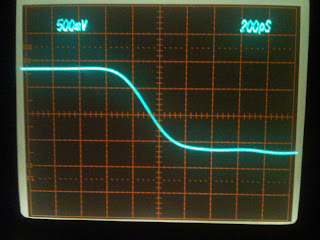 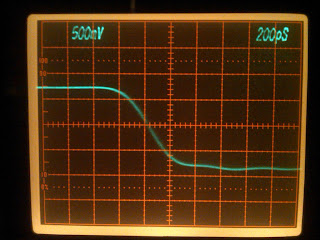 So, even better, they all work. The three pictures you see here were taken on three different mainframes (but with the same 7a29 and 7b15). Life is good.
Posted by Doctor Analog at 7:39 AM

Awesome finds! The 7104 is a great scope. I remember buying a few for a the lab back in the day. Alas, I don't have one now, but I've got the next closest thing - a 2467. Not quite the same BW, but still has the MCP CRT.

I have two questions. could it be said that these scopes are more of a fully functioning upgrade from the tek 519 1GHZ oscilloscope, since they actually have vertical amplifiers and dont have to be connected directly to the CRT?

and since these are not storage scopes, which tek scope is the fastest analog storage oscilloscope?

The 7104 and the 519 are both 1-GHz scopes, but I think the similarities end there. The 519 is a very specialized piece of equipment, with very small CRT deflection, while the 7104 can be used as a general purpose scope (although I wouldn't recommend it: save it for when you need it!).

I'm about to retire so I'm been going thru a phase in my life where I am starting to look backwards. Engineers like Jim Williams,Bob Pease and a genius like Widlar where my engineering hero's when I was first discovering the world of electronics. I learned a great deal from these guys. Back in the 80's I worked at Galileo Electro Optics as an engineer in the newly formed Scientific detector group developing interface electronics. I have found memories of the 7104 that I purchased to measure 1ns-2nS pulses coming from, yes an Micro Channel Plate (MCP scientific) sensor. Kind of ironic that I needed and MCP based scope to be able to clearly see nanosecond events from a MCP detector!

I found one on sale, the guy will give it to me for $50
Should I buy it,, its complete with all plug ins, and it powers on he says.
Can You help me test it out if I buy it. I'm in California, los angeles.