Instead of buying a scope this week, I've decided to retell a scope story that I heard from Jim, with a little follow up:


A Tektronix engineer visiting IBM in the early 1960s saw that they were developing an oscilloscope. When he inquired about it, he was told that IBM wanted a scope for their field-service engineers. After some (probably brief!) internal discussions back in Oregon, Tektronix offered to develop a portable scope to IBM's specifications. IBM had two requirements: it had to be fast enough for computer work (where "computer" probably means System/360) and it had to fit under an airline seat. To satisfy these requirements, Tektronix produced the twenty-nine-pound 50-MHz 453. If you buy one today, many of them still say "Property of IBM". 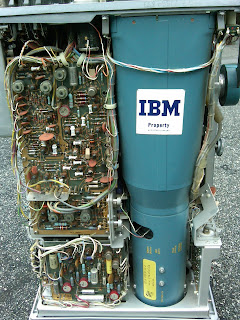 After Jim told me this story, I needed to see for myself. So one time that I was in California at the De Anza Flea Market, I bought a ten-dollar 453 (serial number 23,109), and proceeded to use it as my carry-on for my flight back to Boston. And, yes, it does fit under an airline seat. Here's the proof: 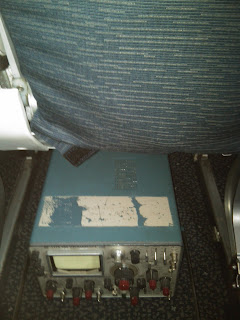 When I sent this picture to Jim, here's the letter he sent in return: 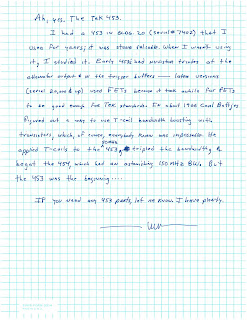 Ah, yes. The Tek 453.
I had a 453 in building 20 (serial number 7402) that I used for years; it was stone reliable. When I wasn't using it, I studied it. Early 453s had nuvistor triodes at the attenuator output and in the trigger buffers---later versions (serial numbers 20,000 and up) used FETs because it took a while for FETs to be good enough for Tek standards. In about 1966 Carl Battjes figured out a way to use T-coil bandwidth boosting with transistors, which, of course, everybody knew was impossible. He applied T-coils to the 50-MHz 453, tripled the bandwidth, and begat the 454, which had an astonishing 150-MHz bandwidth. But the 453 was the beginning...
If you need any 453 parts, let me know. I have plenty.

Finally, I would like to thank the TSA agents at San Francisco International Airport for their cool professionalism. They didn't freak out all at when I put the 453 into the X-ray machine. You would think that a middle-aged guy carrying a middle-aged scope was a normal occurrence! (They did swab it for explosive residue, but I was expecting a much more invasive search.)
Posted by Doctor Analog at 6:34 AM

What an interesting story! I had heard about IBM commissioning the 453 but I didn't know the "under the airplane seat" requirement!

Those long-necked CRTs do make a pretty trace, don't they?

Thanks for the info!

I used to have one of these "Property of IBM", but eventually gave it away. later I stumbled over a brand new 453A in mint condition: Never used, on a flea market. For $70 it was a bargain!

When I was in a group at Tek in the mid-'70s working on the replacement for the 465 and 475 service scopes (as they were called, because they were portable), one of the requirements (for IBM and CDC computer repair) was that the time base be within 1 % linearity (accuracy). Bruce Hofer, who later went on to found Audio Precision, had developed a nifty way to do the sweep generator without using a Miller (op-amp integrator) sweep. Instead, he resorted to simplicity: a current source into a capacitor. Without feedback it is faster and he used this on the 7904 scope plug-in. The hard part was the reset clamp for sweep retrace. For a fast time-base, the clamp had to be fast too (mainly in turning off to start the sweep quickly), and Bruce's circuit was (like many of his circuits) clever. I used it and had no problem meeting the time-base specification.

I just found one of these at the local junk shop, so I had to grab it. All he asked was that I put a junk car stereo in his pickup, so about half an hour later, I had "Car Talk" playing in his truck and a 453 in my hands.

I've cleaned it up a little bit. Seems mostly to work except I can only get a deflection on Channel A if I hold my mouth right and pat the scope near the BNC connector.

Haven't taken the cover off to see what condition the insides are yet.

Until tonight I had an IBM 453. IBM in RTP, NC during a time when the company I worked for purchased a part of IBM. No one seem to want to Tek 453 at the time. But it was part of the purchase and had to be taken along with the other equipment. After the move It still was not used or wanted so I was able to be give the "Junk". Nice Junk! I willingly took it and used it for some video game repairs and other electronics hobby work. Serial 036459.