One of my favorite pictures of Bob Pease is the one of him throwing a computer off the top of the National Semiconductor parking garage (page 145 in his book).  It's a great image of Bob as curmudgeon.

Since today is the anniversary of his tragic death, I decided to throw a computer off my roof in his memory.  I invite you to join me. 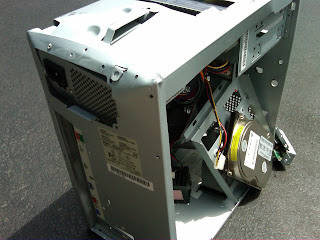 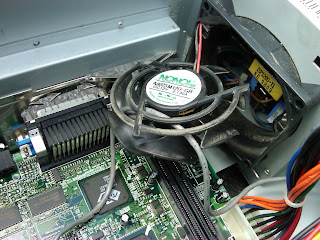 Two stories wasn't high enough.  The outer case popped off, and the hard-disk mount broke loose, but it didn't shatter into a million pieces.  Your mileage may vary.


UPDATE: Dino Segovis (@MakerDino on Twitter) posted an excellent video to YouTube, "Computer Toss in Memory of Bob Pease". He achieved much better results than I did, although the sledgehammer helped. 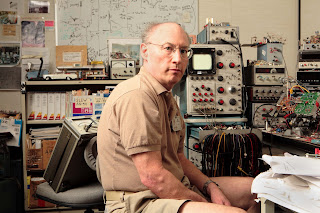 Observe a moment of silence today while the tubes in your scope warm up.
Posted by Doctor Analog at 5:00 AM No comments: 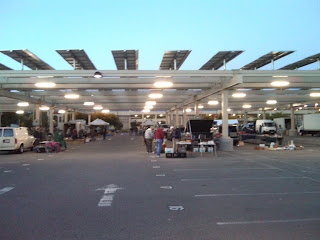 I've attended this flea market a dozen-or-so times, but I had never arrived so early before. I enjoyed the early-morning wandering around and watching the crowd flock from vendor to vendor as they rolled into the parking lot. (It was also the first time I've attended since they moved to the south side of the parking lot, underneath the solar panels. I confess that my heart sank when I came around the corner on Stevens Creek and saw that the north side of the parking lot was empty!) There was some good gear available, but much of it was priced too high. This table also had a Tektronix 475A for $200 and a 454 for $75. Nope. 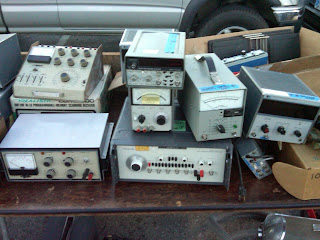 One seller had a stack of 2465 scopes, but without a way to test them (and already having two carry-on bags for my flight home), it wasn't worth the risk. The 2465 is a nice scope if it works, and a terrible scope if it doesn't (it's basically unrepairable because of unobtainium custom parts). This seller also had two 7104 mainframes, but they were sold before I got to the space. 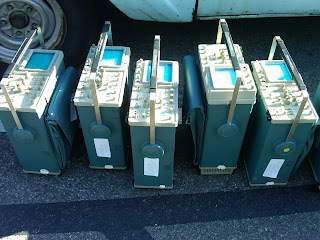 There was some other interesting and pretty gear there, but no large items that I really needed to buy. 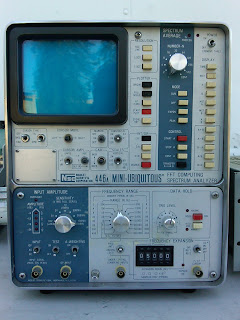 This next item made me laugh out loud. "Connects 2 components instantly!" You know, as opposed to all those wires that connect things gradually. 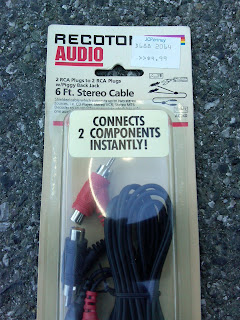 Several items I wish I had bought, but was beaten to the punch before I made up my mind (little stuff, like a fat bag of 3904 transistors, a set of over-sized crystals, and a Boss OD-1). There was also a weird Tektronix 500-series plug-in module (it may have been a Type K) that had its faceplate sanded completely off. Curious. However, I did not come home empty-handed. in addition to a vacuum tube and a different set of crystals, I found a binder full of six years (1972 to 1977) of the TekScope application notes for $3. Very, very nice: 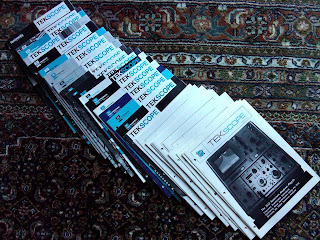 The best part of the flea market was running into some friends, both old and new. I saw Prof. Tom Lee there (who is supposed to be in Washington D.C., but also scheduled some West-Coast business for flea-market weekend), and I also met Jerry and Fran. However, I must admit that it really wasn't the same without Jim.
Posted by Doctor Analog at 8:51 PM 2 comments: