Jim's lab bench from Linear Technology is on display at The Computer History Museum until April 2012. They moved his primary work bench, trademark mess and all, to the museum (apparently, they just shrink-wrapped the whole thing for transport). It's part of a exhibit dedicated to Jim called "An Analog Life", and they have a very nice write-up about it on their web site.

Last night, there was a reception and panel discussion to officially "open" the exhibit. I flew out to California (and back!) yesterday in order to attend the festivities, talk to some attendees, and take a few pictures. It was a great evening, with a large crowd that included many of Jim's coworkers and friends.

A large picture of Jim looms over the bench. 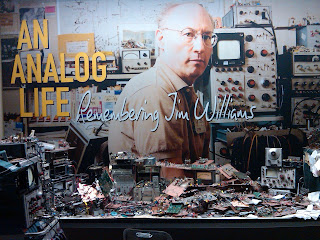 Here's a view of the whole thing. Not shown in this picture is the Tektronix 575 curve tracer that is sitting behind the phone in the foreground (you can just see a tiny piece of the transistor socket behind the handset). 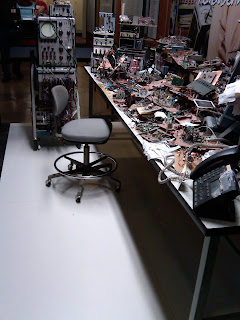 His trusty Tek 547 and 1A4, with camera attachment and a jungle of probes and cables, sits at one end of the bench. 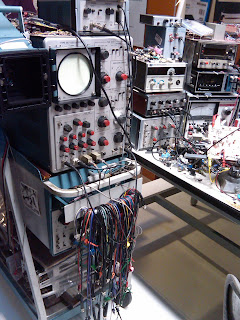 His soldering iron sits between a pile of components and a giant pile of his project boards. One long assembly of boards forms a bridge from voltmeter to voltmeter in the background. 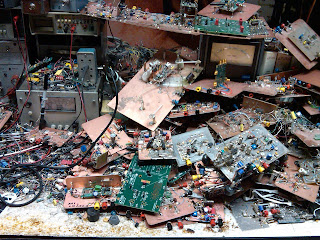 Another close-up of the circuit-board jumble, showing some recent(?) power-converter work, a large stack of polaroid scope photos, and a pile of production CCFL boards (lower right). 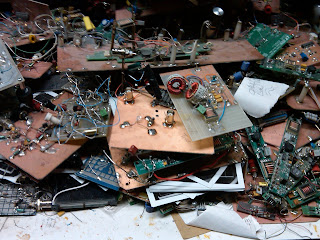 One piece of the exhibit made my heart stop. My business card is on the top of one of his piles in front of his Tek 454. It's dirty, smudged, and crinkled, but it's right there. On top of some circuit boards, on Jim's bench, on display at the Computer History Museum. 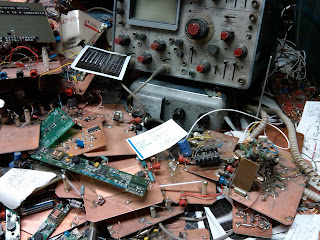 This is the highest honor I have ever received.
Posted by Doctor Analog at 7:45 PM

Well, considering how good you are at maintaining this blog, it's an honor well deserved. Keep up the good work. There's so much to learn in Jim's work! Thank you.

I would expect an Hewlett-Packard calculator to be buried somewhere under the boards?