"Designs for high performance voltage-to-frequency converters." 20 pages.
I'm surprised at the shear number of voltage-to-frequency converters that have appeared in these early application notes. Jim really had a V-to-F obsession going on here. So far, we've seen V-to-F converters in App Note 3 (1 circuit), App Note 7 (7 circuits), App Note 9 (3 circuits), App Note 11 (1 circuit), and App Note 13 (3 circuits), and now we've got a whole 20-page app note devoted to them (and there's more to come in future app notes). Did Linear Technology have that many requests for help with voltage-to-frequency applications? Or did Jim just love building them?
Of course, if the progression from App Note 7 Figure 8 (100 dB of dynamic range), to App Note 9 Figure 21 (150 dB), to Figure 1 of this App Note (160 dB) is any indication, he's getting good at designing V-to-F converters. Really good.
This app note is dedicated to ten more circuits that implement voltage-to-frequency converters. The box section (starting on page AN14-19) contains a brief tutorial, showing five different basic topologies (it's good introductory reading before the rest of the app note). Clearly, the best circuit is the star (and start) of the show, the "King Kong V-to-F" in Figure 1. This circuit is an amazing topology (compare it to Figure 21 in App Note 9). The text says "This circuit, similar to those employed in oscilloscope triggering applications..." and if you peek ahead at the references, you'll see a reference to the trigger circuit in the Tektronix 2235. Here's the relevant portion of the schematic from the 2235 service manual: 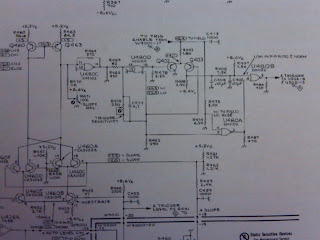 This circuit is an impressive example of Jim's talent for synthesis. Marrying together the brawn of speed (the trigger circuit with the ECL 10K and 10H gates) and the brain of linearity in the feedback path (the LTC1043 switched capacitor and the LTC1052 chopper amp), this Frankenstein monster really does achieve the best of both worlds. (Staying with the monster-movie theme: it was either that, or a gorilla joke.) A lesser engineer would have just ended up with a muddled mess. This circuit is an example of great design (the feedback path), outright theft (the trigger circuit), and a few gruesome hacks (the linearity correction and the one-gigaohm resistor in the collector of the 2N3904). Respect.
Figure 5 is another Pease-type V-to-F converter, but a "highly modified, high speed variant" of a Pease-type. Hmm. It would be interesting to check Bob Pease's publications in this time period and see if there was some friendly one-upmanship going on between these two former National Semiconductor colleagues.
The rest of the circuits cover a wide variety of V-to-F schemes and functions. Figure 8 is quartz stabilized for improved temperature coefficient. The "ultra-linear" design in Figure 10 includes additional inputs and hooks for a processor-driven gain-and-offset calibration scheme. Figure 12 is a 1.5-volt single-cell circuit exploiting the LT1017 comparator (pressed into service as an op amp, too, here). (More single-cell circuits are coming up in App Note 15 tomorrow). Figure 14 is another sine-wave output VCO (again abusing the under-appreciated AD639; see App Note 13 part 2). Figures 17 and 19 have 1/x transfer functions, and Figure 21 has an exponential transfer function (which, instead of volts-per-hertz, implements volts-per-octave for electronic-music applications). Finally, Figure 23 implements a ratiometric converter, measuring the ratio of two resistors.
The best quote is the (possibly) subtle tweak at Bob Pease (on page AN14-4): "The charge feedback scheme used is a highly modified, high speed variant of the approach originally described by R. A. Pease." In other words, Bob had a good idea, but it was too slow!
Posted by Doctor Analog at 6:04 AM

Email ThisBlogThis!Share to TwitterShare to FacebookShare to Pinterest
Labels: V-to-F