This app note is the first one starting with a history lesson (the first words are "In 1822"), along with the oldest reference (also 1822) on page AN28-13 (well, the oldest so far). He goes on to describe a variety of temperature sensors in general and thermocouple behaviors in particular. The chart on page AN28-2 is a useful summary of the characteristics of thermocouples, thermistors, platinum RTDs, sensor diodes, and IC temperature sensors. The chart on page AN28-3 lists half-a-dozen kinds of thermocouples, and the accompanying text discusses cold-junction compensation and ice baths.

The rest of the app note describes the LT1025, which provides cold-junction compensation without an actual ice bath. Several op amps are suggested for the precision job of thermocouple-output amplification, including the precision LT1001, the chopper amplifiers LTC1050 and LTC1052, and (the now discontinued?) bipolar LTKA00 and LTKA01 amplifiers.

Three circuits (Figures 13, 15, and 17) are given for isolated applications. The best circuit is Figure 15, with 0.01% accuracy. He spent a lot of time working with isolated applications. Again, I think isolated signal chains are in the category of "important to instrumentation, but often ignored by circuit designers" topics. You don't spend a lot of time discussing them in school, but in the real world, isolation is often needed. Practicing engineers (especially integration engineers) probably spend more time worrying about grounding and isolation than any other concern.

The final circuits implement linearization, with a variety of techniques: offset (Figure 20), diode breakpoint (Figure 21), analog multiplication (Figure 22), and digital (Figure 23). Figure 23 is accompanied by nearly three pages of assembly code. The software comes with an appropriate disclaimer from Jim: "Including of a software-based circuit was not without attendant conscience searching and pain on the author's part. Hopefully, the Analog Faithful will tolerate this transgression." Still, I teased him about it.

The best quotes come from page AN28-19 in Appendix A's discussion of error sources: "Minimizing sensing error is the manufacturer's responsibility (we do our best!), but tracking requires user care... As a general rule, skepticism is warranted, even in the most "obviously simple" situations. Experiment with several sensor positions and mounting options. If measured results agree, you're probably on the right track. If not, rethink and try again."

The app note concludes with another cartoon. 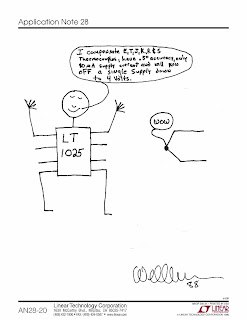