Speaking of test equipment (it's not all Tektronix around here), I am dumbfounded by the announcement this week that Hewlett-Packard was going to shed its computer business. Wasn't getting into the computer business the whole reason HP spun off Agilent and bought Compaq ten years ago? I predict that in ten years, HP will be a management consulting company, and ten years after that, it will be a zucchini farm. Despite the incomprehensibility of the logic behind this announcement, it does make a recent acquisition of mine even funnier. 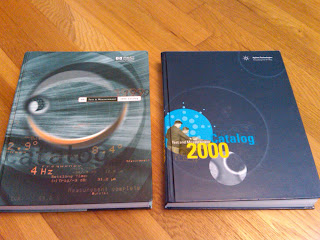 On the left is the 1999 HP Test and Measurement Catalog, and on the right is the 2000 Agilent Test and Measurement Catalog (also known as the transition of the coming apocalypse). One good sign was a picture of the HP 200A audio oscillator on the inside front cover of the Agilent catalog, but I'm afraid the other omens were bad (at least bad for HP). 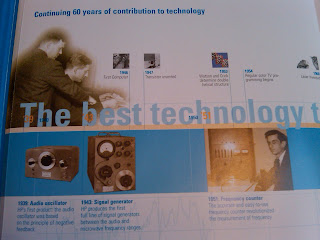 I am reminded of a picture and caption of David Packard, Bill Hewlett, and Bill Gates that Jim had on his bulletin board at work. I've tried to recreate it (and paraphrase it) below. Packard: "What's that young man talking about?" Hewlett: "Hell if I know, but I know I don't like it."


UPDATE: My friend Eugene sent me a link to this letter, which is an appropriate addition to this conversation: 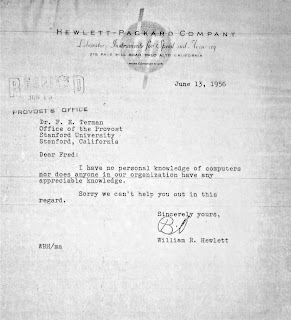 I have no personal knowledge of computers nor does anyone in our organization have any appreciable knowledge.

Sorry we can't help you out in this regard.

Letter from Steve Blank, Elephants Can Dance – Reinventing HP.
Posted by Doctor Analog at 7:12 AM

What I really like about Agilent (and what they do way, way better than Tek) is the fact that they offer tons and tons of ancient service manuals for long-discontinued boat anchors on their website. For free. And without even asking you to register.

What! An! Awesome! Culture!