"Switching regulators for poets: A gentle guide for the trepidatious." 24 pages.

This application note is a classic. I think it's the first one where Jim's personality and sense of humor really shine through his writing. There are a lot of gems here, even just on the front page: the title is a classic, along with the discussion of Everyman and the poets, and "my poetry ain't very good." I also like his acknowledgment of the "encouragement" from the Captains of his corporation. Page AN25-24 sports his first cartoon, which will become something of a trademark. 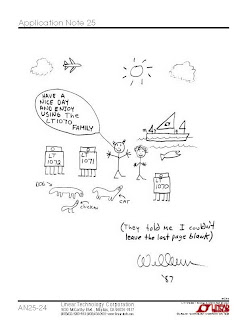 The app note itself is pretty short: only twelve pages of text (and twelve pages of appendices). Discounting Figure 1, there are really only five application circuits here: Figures 4, 6, 9, 17, and 18. The best circuit is the monster in Figure 9, the 100W off-line switching regulator, an impressive achievement.

The appendices contain some great advice. Appendix B is a very practical treatment of compensation for switching converters. It's not as analytical as I would like (what's new?), but it is practical and exhaustive for this application (and it isn't the mess that App Note 18 contains).

Appendix C is worthy of particular note: Figure C1 shows the first oscilloscope labeled as a Type 547 with a four-channel Type 1A4 plug in (which we've known all along). However, I believe that the pictures in Figures C2, C3, and C4 are from Jim's Tek 556 (note the damaged gradicule). If you look back at Figure 16 in App Note 18, you'll see the same damaged gradicule with six traces on the screen, which requires a 556 with two 1A4 plug ins. Figures C5 and C6 show some nonideal turn-off and turn-on effects in diodes, which is the topic of a future app note.

The evolutionary design approach in Appendix D is very good method. I have seen more than one engineer attempt to power up a design such as Figure 9 all at once, and the fireworks are often worthy of the 1812 Overture.

The best (funniest) quote appears on page AN25-13: "The author acknowledges Carl Nelson's abundance of commentary, some of which was useful, during preparation of this work", although the parenthetical statement on page AN25-4, "(ground as I say, not as I do)", is a close second.
Posted by Doctor Analog at 7:33 AM

The screenshots are definitely from the dual beam 556 scope. Note how the graticule is designed for the upper and lower beam (with two horizontal "zero" lines, one three div. below the top and one three div. above bottom).

This is the 100-million dollar app note. Apple computer was designing their first laptop, and Steve Young came across this app note. He called Jim up, and explained they needed the whole power system designed for the notebook, including the cold-cathode fluorescent (CCFL) lamp driver for the back-light. Jim supposedly told Steve: "Hang on, I am going to call you right back from Bob Dobkin's office." The upshot is that Jim and Carl Nelson went and worked at Apple's campus for 4 months, and that is what sentenced Jim to work on CCFL power supplies for a decade or so. Jim begged Dobkin to take him off the projects, but Jim was delivering working hardware, and that is a pretty seductive thing. All in all, the chips Apple bought from Linear Tech made them $100 or $200 million over the years, if I remember what Steve Young said at the Jim Williams remembrance at the Computer History Museum. That is one wicked app note, a few pages that brings in that much money.