Some of the appendices of App Note 35 are fun to read. Appendix A just discusses the internals of the LT1074, but Appendix B discusses the external circuitry. Inductor selection is discussed again (similar to Appendix D in App Note 29), but this time with an added bonus: the "Alternate Method". While the purchase of a induction selection kit (Figure B2) is still the preferred method, inductor selection can be accomplished with a quick trip to Safeway (shown in Figure B8, that's a grocery store, for those of you not on the west coast of the US). Additional humor (or is it teasing?) is found in Figure B9 and Footnote 13. The general idea is to find inductors with significant flux-storage capability and low resistance, but the presentation is classic Williams style.

Appendix D discusses the optimization of efficiency, and is similar to Appendix E in App Note 29 (although Figure D2 and the accompanying discussion are new).

Appendix E discusses a reference half-sine generator that is used for the 115-volt 400-hertz sine-wave-output converter in Figure 31. Unfortunately the approach here is a digital technique, with samples stored in a 2716 EPROM, rather than an analog approach. Reading between the lines, I think you can tell that using a digital implementation here bothered him; you know how much he loved his sine-wave oscillators! (App Note 43 is coming up, soon. He'll get his fill.) I think quoting Philbrick in the footnote (see below) assuaged his guilt.

The app note concludes with two cartoons! "Kick all that creaky discrete stuff outta here" on Page AN35-31 and the famous "Call me" on page AN35-32. We'll see a reference to "Call me" again, soon. 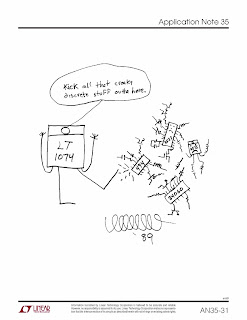 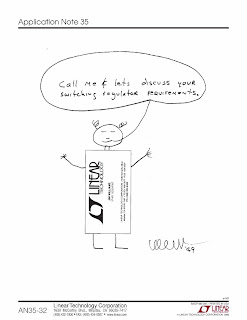 Best quote (footnote from page 28): The sinewave is probably the paramount expression of the analog world. The Old Man Himself, George A. Philbrick, once elegantly discussed analog functions as "those which are continuous in excursion and time." He might have viewed digital production of a sinewave with considerable suspicion, or simply labeled it blasphemous. Such are the wages of progress.

Posted by Doctor Analog at 4:35 PM

I just wanted to let you know how much I enjoy reading your articles.

I am painfully aware that quite often posting on the internet feels like shouting in the wilderness . Please be assured that your efforts are highly appreciated, and I know several other EEs which think the same.

Please keep it up!