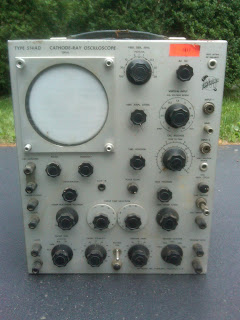 This scope has some interesting features: It was the first scope to offer both a 10-MHz bandwidth and DC response (the 511 only had the former, the 512 only had the latter). The 514AD version include a 24-section 250-ns LC delay line. It also includes (I am told) tons of selenium rectifiers. Fun!
Posted by Doctor Analog at 12:00 PM

Hello! I just got one of this huge 514AD scopes.
How i get the unusual power cable?
Thanks!